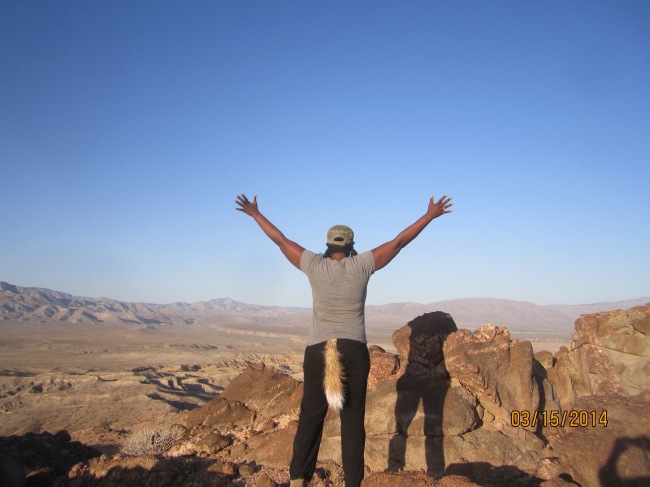 So I have officially put my intention out there starting in April 2015, I will nouthbound (NOBO) thru hiking the 2,660 mile Pacific Crest Trail.What’s the Pacific Crest Trail (PCT) you ask, well it this really long trail that begins/ends at the Mexican and Canadian borders in Campo, CA and Monument 78, WA, respectively.  It goes through 9 mountain ranges, 26 national forests, 7 national parks, 5 state parks, and 3 national monuments, as well as 6 of the 7 North American eco-zones (no tundra). Give or take about 300 people set out every spring to hike the trail in one season (“thru hikers”) and about 40% finish. Yep, i’m going there, and I’m so excited.

Why would I want to do the PCT you ask? In the words of Amelia Earhart, “ I want to do it because I want to do it.”  That’s basically it. Actually I have been trying to get out more, as in outdoors out. Recently I signed up for a Wilderness Basics Course, so I have been out seriously over appreciating nature for the last ten weeks. Turns out when I am hiking I feel more alive, healthier, more connected, and even happier.  When I get to see the sunset, the moon rise and the stars in the sky, I feel all giddy.  More than anything it’s time for an adventure that challenges me and gets me out of my comfort zone. I need to feel like I am moving towards something, not just going through the motions.

Concerns, I have them, they are money, gear, training, and maintaining this journal.

I will be mad saving for the next year, probably take on a second job also. This will be a true challenge as I am not good with money and I already have A LOT going on this year.  I have to cover all the bases plus be prepared when I return. There is also A LOT of gear I will need because what I have either isn’t suited for this or I just don’t have it. Geez there is so much gear, recommendations, reviews, it all makes my head swim. But I have lists! So I’ll just keep reading, testing, and pricing til I have the right collection. That’s the current plan.

As far as training I need to get out and hike A LOT each weekend from here on out, otherwise I may be in trouble. Honestly I’m not in the best shape. I’m not in horrible shape either. My recent group hikes have not been over 5 miles, even less with a pack. A couple of weeks ago I decided I really needed some miles so I decide to hike El Cajon Mountain. Holy crap! That was the hardest hike I have ever done. About 11 miles of up and down, just as many ups going down as going up! Actually it was pretty terrible around mile 8, my legs were cramping so bad. I could not figure out why I had plenty of water even Gatorade (spoiler alert: I only had a 6 inch sub and peanuts, bad-idea. I had forgotten my pop tart breakfast in the car!) Well, I learned some things, I REALLY need more miles and I REALLY REALLY need to pay attention to my hydration and nutrition. Even though I was not prepared and my legs were sore for 3 days I liked that I completed it, all by myself! (I could have hopped on the golf cart with the Ranger that drove by, but nope I just waved and smiled through the pain)

Everybody seems to have a PCT blog, journal, video,or something. Sure it’s a really great idea, however, I really suck at keeping a consistent journal. I’ve had a couple of blogs that all at some point I abandoned. Even when I was younger I would write in my diary everyday….then not for like months. A writer I am not, but I’ll give it my best go, so don’t expect much and you won’t be let down!

So there, that’s it! It should be a interesting year. There are a whole bunch of hikers hitting the PCT soon(some already out there). I am excited for them and will following like a gazillion blogs! Posting links to some of my favs.

so until next time…..chardonnay everyday!

I've lived a lot of different places. It's a real joy to experience/explore a new community. People live in their own way, everywhere, it's important to understand that and be open to those unique experiences. Joshua Tree is definitely different (but a similar vibe) and I'm here for it.
My path has long been a quest of experience. In the wake of my health issues those experiences come with some limitations. I walked 10 miles the other day and was completely exhausted, followed by soreness and hip pain. I attribute it to the medication because I refuse to let cancer define who I am or what I can do. The path has changed but I'm still moving forward. Dusted off the old blog to share some things. So check it out! Wanderingchardonnay.com
Fun night in the JT desert. Meeting new people, seeing old friends, eating good food and catching the sunset. There was even a dog that looked like Chewbacca!
Many great little hikes and places to explore in the San Diego area. Sometimes I take pictures and share. Sometimes I just keep my sauntering and cool areas to myself.